Exploring your cultural identity within the British Asian culture can sometimes be a struggle, it could be from wanting to go out with your friends when you were at school and your parents disallowing it, scared about what relatives will think. Or to finding a partner who isn’t Asian and trying to find the strength to tell your family about your relationship, worried they would disprove.

The talented Guleraana Mir has created a irreverent but dark comedy, looking into a contemporary British Pakistani experience, exploring the implications of religion and faith in modern romance, titled ‘Coconut’.

We had the lucky chance to interview her about this and her personal experience with cultural identity.

We’ve all heard the term ‘coconut’ (brown on the outside, white on the inside), you’ve either been called or labelled as one. The play is a about a British Pakistani woman called Rumi, who is often on the receiving end of the term. Born and brought up as a Muslim, spending her time enjoying fine wine and bacon rather than at the mosque. The play follows her romance with a white guy and his decision to convert to Islam, hoping this will be enough to make her family happy. But things get complicated as he begins to explore his faith. 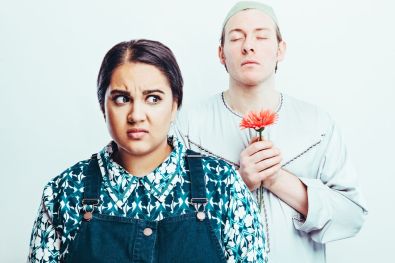 Yes! My parents love the theatre and took my brother and I to see musicals from a young age. Ever since I’ve expressed an interest in writing, my mother’s made it very clear that she won’t stop pushing me until I’ve made it onto the West End! She might be waiting a while though. There are still too few performances of works by women, let alone women of colour.

With regards to the themes of the play, they think it’s important to be open and honest to try and change attitudes and so have supported me throughout the process of developing it. 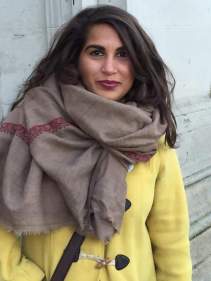 Rumi’s story, whilst very similar to mine at times, is definitely not my story. Having an opportunity to explore themes that are important to me through a character like Rumi was fun. I felt her sassy and upbeat outlook on life would counteract the dark places I wanted the play to go, and that allowed me to be free and honest in the storytelling.

As for medium, I’ve always written plays and so theatre felt like the most immediate way to present my characters on their journey.

Be honest with yourself and each other. Understand how much you want your faith – or your partner’s faith – to be a part of your lives. Talk about big decisions early like if you want children and if they will practice either one of your faiths or not at all.

Basically be sure that both of you know where the boundaries are and be willing to accept that you might have to move slower, or faster than a ‘normal’ relationship.

Very much so. Growing up I wanted to do things like go to gigs, dance at nightclubs and travel the world. I wasn’t interested in Bollywood movies or Asian fashion. I didn’t understand why there were so many family events that I was obliged to attend when everyone else at school was hanging out with each other and having sleepovers.

There wasn’t as much of a strength in the British Asian identity as we have now and I just felt out of place everywhere I went. Not white enough to be British and definitely not your typical Asian.

Nope.  Most ‘diverse’ work on our stages and screens is historical, international or stereotypical. Where’s the Asian Chewing Gum or the British Master of None? Where are the stories of strong brown women who just get on without life and aren’t submissive, boring stereotypes? Until we have characters on stage and screen that reflects the myriad of ways you can be British and Asian we won’t have true diversity, or representation.