Phizzical in association with the Belgrade Theatre present ‘Bring on the Bollywood’, a sparkling performance that fuses the British and Indian cultures spectacularly. A production full of vibrant colours, witty humour, immaculate dance routines whilst demonstrating the exotic taste of the Bollywood culture and the Indian cinema. 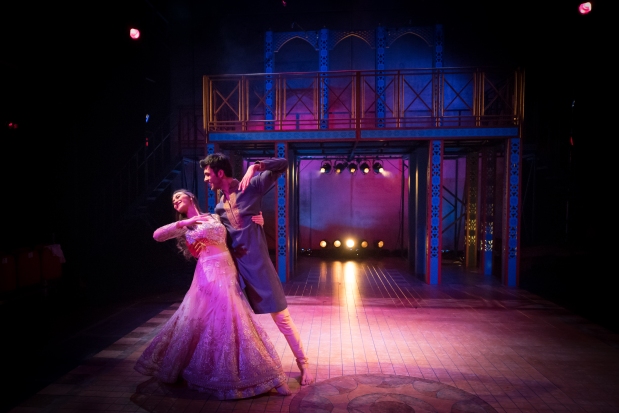 The story starts Dr Katrina Pawar (played by Sohm Kapila) living in London, a 30-something hopeless romantic who dreams of a Bollywood style romance. What every girl wants right? Her mother is a professional matchmaker and more than ever determined to find her a nice Indian suiter. She is called to India to join the rest of her family to attend her brother Lucky’s wedding. On the plane she bumps into the intriguing Ronny (Adam Samuel-Bal) who is on a journey to scatter ashes and collect holy water for his father. Their paths cross again (of course, this is Bollywood!), when Ronny’s friend Amit (Rishi Nair) seeks out his soon to be wed girlfriend (who just happens to be Katrina’s brother, yikes!)

The talented cast really shine through in this production, particularly Katrina’s parents played by Rohit Gokani and Sakuntala Ramanee, their sharp witty relationship have the audience in heaps of laughter. We especially loved Rekha’s character played by Nikkita Chadha, and became her fangirls by the end of the show. Her role was completely adorable and endearing. For her debut performance in a principal role, she did not shy away for giving a truly talented performance. We can probably talk another 1000 words on how brilliant each of the cast were, particularly Sohn Kapila, Rishi Nair, Bhavin Bhatt. Rasheeda Ali played her role fantastically, just wished we saw more of her and her absolutely gorgeous outfits! Ahhh the cast and costumes were all superb! Especially the dancing, the different styles of Indian music used were thoroughly enjoyable. And yes, inspired by this musical, we ending up signing up to our local Bollywood dance class, with the dream of possessing even a little bit of that Bollywood sass!

Hats off to the director Sâmir Bhamra and the team for creating such a fun and entertaining show. The infectious dazzling essence of Bollywood is effortlessly captured in this loveable production. We can guarantee you’ll be thoroughly entertained, and by the end of the show, day-dreaming of running away to dance in India’s Shimla hills or the Valley of Flowers. A must-see for all the family as well as Bollywood and theatre fans alike.

The show is on this Friday 29th and Saturday 30th April at the Belgrade Theatre, Coventry.