When you think about the day you’ll get proposed to; you imagine everything to be perfect. Every moment leading up to mine was a complete disaster, well that’s what I thought at the time anyway. In hindsight, it’s a pretty funny story with a perfect ending (sorry about the cheese 🌚). So my fiancé Sam and me headed to Cannes in the French Riviera for a short break, and we endured delays, a missed flight, and all of our luggage getting lost. I had no makeup, clothes, shoes – nothing! (Luckily the ring wasn’t in a suitcase!). Sam told me he’d pre planned a boat trip to Monaco for the next morning, I was in no way prepared for a day in glamorous Monaco, all I had was a jumper, jeans and trainers which I’d worn on the flight. We checked into our hotel around 11pm and ordered copious amounts of room service and wine – I needed cheesecake and a glass of red for my sanity at this point.

The next morning we headed to the town centre as soon as it opened, I had to get a wash & blow dry as I had no hair appliances (not even a hairbrush). We both then raided Zara as we only had a window of 1.5 hours before our trip to Monaco (side note: we didn’t actually go to Monaco, it was a made-up story to make sure I looked good on the day lol). Thankfully my fellow Bindi’s were on hand to help me choose an outfit; which was causing me MAJOR stress, I was frantically sending awkward dressing room selfies in the group chat!

With about 40 minutes to spare, I handed Sam my shopping basket and rushed to Sephora. Like most guys would, he laughed at the fact I bought matching accessories, right down to the earrings. My experience in Sephora was somewhat of a nightmare too, and I basically hated my makeup but I didn’t really have a choice as it was time to go.

A last minute outfit, a 70’s style blow dry and makeup I hated isn’t quite what I imagined for the day I became someone’s fiancé – but it was still the best day. The proposal itself was perfect, a yacht to ourselves with champagne, roses, delicious food and breath-taking views. Yes he got down on one knee, and yes I cried!

A few questions from the rest of the British Bindi girls…

1. Always the next big question after saying yes… did you have any idea?

I did and I didn’t. When we went to Rome back in February, I thought he was going to pop the question then but he didn’t, so I didn’t have my hopes up for Cannes! We’d also fallen out a few days before so there was a little tension (lol 🙄), so I didn’t think it was going to happen at all. However, when we eventually found our yacht, there was champagne and roses, so I obviously thought ‘what if?’ as the setting was so beautiful, but at the same time I thought it was just a sweet surprise he’d organised. 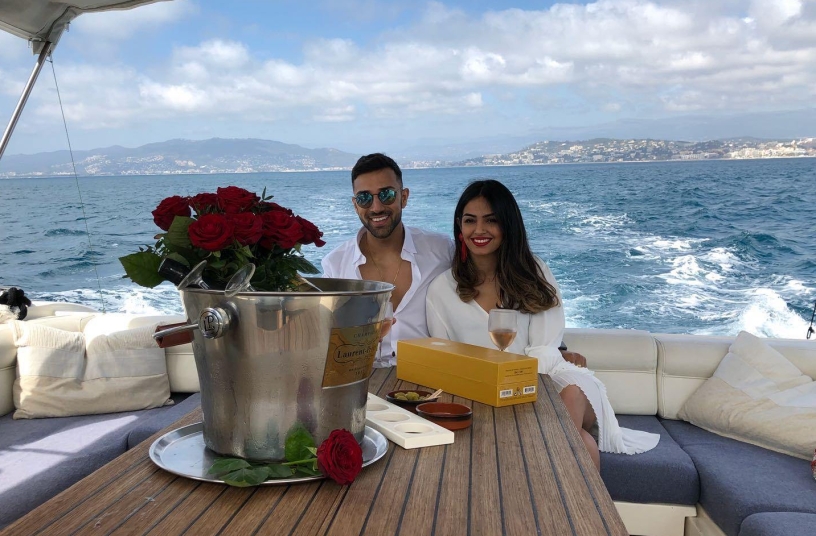 2. Okay… so we know you lost your luggage and our British Bindi WhatsApp group was freaking out! What happened?

Literally the worst travel experience of my life! 😩 We had a connecting flight in Amsterdam which got delayed twice and we ended up missing! When we eventually arrived at Nice airport 4 hours later than originally planned, none of our luggage turned up. It turns out that it was still in Amsterdam! We checked our hand luggage in too, meaning we had absolutely nothing. The whole day was a complete disaster and I cried on the way to our hotel, so dramatic I know 😂

Thankfully yes! I got back from a trip to New York the day before we headed to Cannes, so required infills and luckily got a slot the evening before we went! My nails were done by @nails_byrubi – she’s amazing! 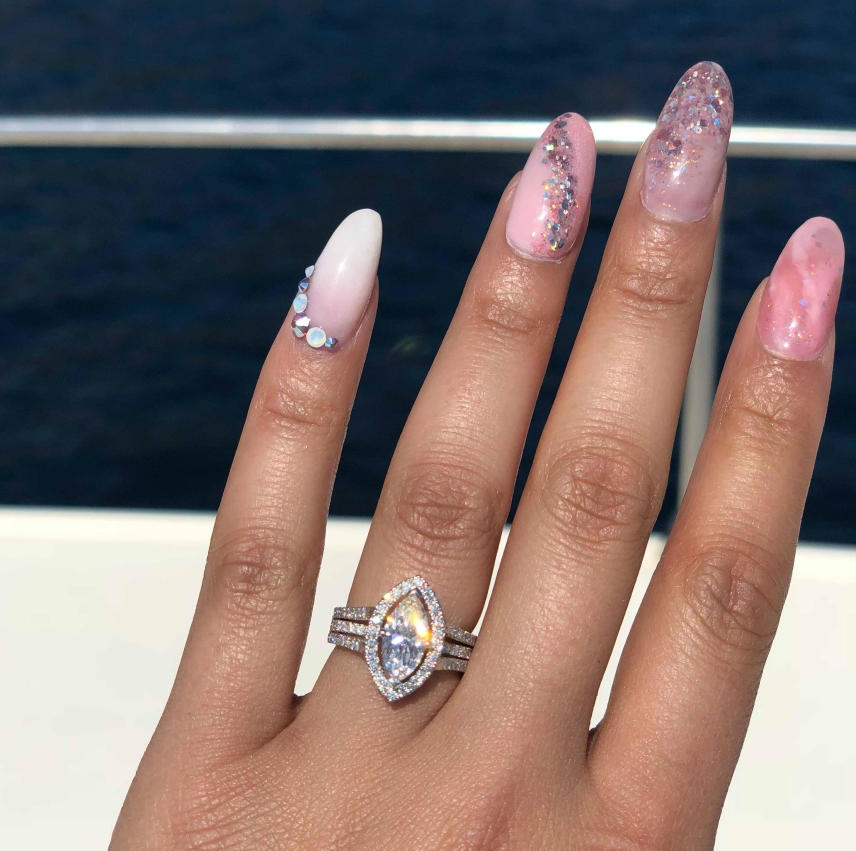 4. How was the ring chosen?

So, my fiancé (that sounds so weird!) has a friend who specialises in diamonds and I had a chat with him in the past about my dream engagement ring; which was a pear shaped pink diamond. Little did I know but natural (not treated) pink diamonds are extremely rare (and expensive!). So together they designed a really beautiful and personal engagement ring, he even included a pink diamond underneath the main diamond. The engraving inside my ring reads “Stick with me I’ll show you the world”, which is something Sam has always said to me jokingly, as we’ve been lucky enough to experience so many things together already; which made the ring even more personally detailed.

5. How do you feel going from a girlfriend to fiancé? Does it feel different?

Sort of, basically shit just got serious! The topic of conversation lately has been about engagement parties, the wedding, a house –  so in that sense quite a bit is different! However, I don’t feel more grown up like I thought I would have, not sure if that’s a good thing or a bad thing 😂 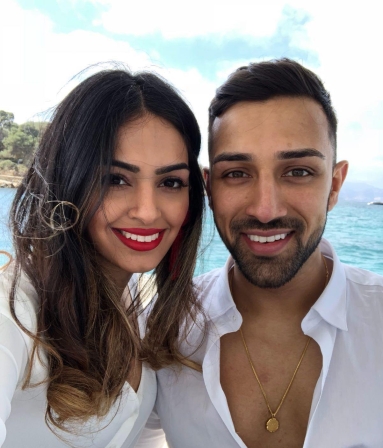 6. What will you remember most from this special moment?

Strangely, the song playing in the background when he got down on one knee. I don’t think I’d heard it before and it had no words, just music. But every time I listen to it now, I remember that moment so clearly. The song was ‘Sunset Lover’ by Petit Biscuit.

One thought on “British Bindi’s Jasmeen gets engaged!”